Well my partner has just picked up a Nokia Lumia 820 via T-Mobile UK. A mere month after the official UK ‘launch’ date, they can now furnish you with, arguably, the finest handset in the current Nokia Windows Phone 8 lineup. Find below my unstructured thoughts… 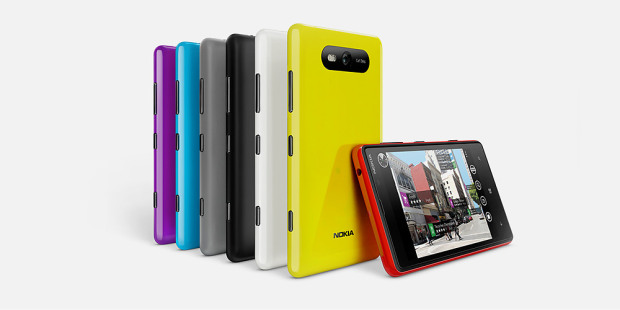 Quality Speaks For Itself
I can’t believe I’m saying this, but the handset feels higher quality than it’s flagship big brother, the Lumia 920. The high contrast and popping colours on the AMOLED screen more than make up for the resolution deficit vs its sibling. Yes, 800 x 480 pixels is a LOT less than 11280 x 768, but the Windows Phone 8 tiles really benefit from strong tones and deep blacks, to the point where I don’t CARE. The reality for many people is that they don’t spend time watching movies on their 4.3″ smartphones. Perhaps, like me, you have a short commute to work so can only fit in a few rounds of Angry Bird? Well the good news for you is that the high contrast AMOLED screen makes the 4 games available for WP8 (sic) look fantastic. Who want’s real life flesh tones, and photography graded muted pallets? I have the real world to look at for that, and trust me. Real people’s flesh tones look sickly and horrible this time of year

The quality doesn’t stop there though – the plastic shell fooled me into thinking it was metal. My Lumia 920 shipped with a dirty great chunk out of one corner, and even with my OCD driven careful handling of the device, the polycarb mono block has still picked up a few hair scratches. This shell feels sturdier, and is replaceable at negligible cost (vs a phone) to boot! The ceramic keys are up there with the 920’s, if anything higher as I’m feeling less play on them.

Good thing Come In Small Packages
The handsets geometry makes more sense to me too. Much like the iPhone 5, it is hand sized, unlike it’s cyclopean BIG bruv. The battery is pretty small (physically) but all reports so far indicate that for the target user base of this handset (somewhere below power user, but above Grandma) it will be more than adequate. YMMV but I’ll return with stats once my partner has bedded the phone (well, more importantly the battery) in. A Micro SD card is another tiny treat for the customer bold enough to buy this handset, something the Lumia 920 sorely misses. The Windows Phone 8 OS, as I stated in my other Lumia 920 posts, is pretty amazeballs and is the best treat of all.

The Impossible Dream
However, nothing in life is perfect, even the Lumia 820. The camera is noticeably worse in challenging situations than the iPhone 4X/iPhone 5/Lumia 920, it’s headline 8MP camera being just that; a headline.

Removing the case, should you want to replace your shell with a charging capable one (my partners shipped with one out of the box, YMMV by region), or should you need to do something as demanding as putting in the micro-SIM to use the device as a phone is challenging. Allow me to state an unstated pre-req… YOU MUST HAVE FINGERNAILS THE SIZE & STRENGTH OF BUTTER-KNIFE TIPS. I only have little diddy finger nails due to a disease where I keep eating them, hence if there hadn’t been an adult around to help me open the phone, it would have been demoted to a Microsoft Wireless ZunePod 8.0. I provide ye with the guidance here for changing the shell, but I can must emphasise, it is hard. Especially if you don’t want to break the proscribed methodology by bringing some metal instrument into play, potentially wrecking your lovely AMOLED screen. Your finger nails will break and you will fear for the structural integrity of the phones shell. You have been warned.

In summary, I’m impressed with this sub-flagship phone. This would make a great business handset (hint-hint employer) and I’m sorely tempted to go out and buy one, if it wasn’t for the current list price (£379.95 SIM free). I’m not saying that’s too high for handset of this quality; nay it’s a bargain. I just don’t have the spare scratch pre-Christmas.

I’d go so far as to say that this tiny titan is a great sign for the recently unveiled , a phone even further down the pecking order. The Windows Phone 8 experience clearly translates well from flagship handsets down to more commodity fare, so I can see the Lumia 620 being a commercially successful device. It’s got a low clock speed processor (WP8 don’t need no stinking clocks) and uses well established screen technologies which should equate to fantastic battery life for the customer and increased margin for Nokia. NB: In the authors mind it isn’t a crime to turn a profit. Sorry Internet… Its pricing is rumoured to be the good side of £200 (read cheaper) SIM free/unsubsidised which should translate to a touch cheaper for Pay As You Go contracts, a Western niche I could see it doing well in, outside its initial target market of the developing world. It’s got interchangeable shells, which should increase its longevity and raise its appeal with the cool kids, also potentially increasing sales. Most importantly, it comes in Lime Green and everybody loves Lime Green.

(How do you think Marvel sell so many of those Hulk comics? It isn’t for the plot…)