Whilst recently working on our proof of concept SCVMM2012, I decided to configure the deployment of our branch office guest work loads as a Service Template, just to see if it could be done.

This allowed me to play with the 1:Many VHD:Template relationship one can establish using Guest OS Profile & Hardware Profile stacking. All went swimmingly for our various guest workloads, excluding the Server Core DC’s. When one deployed a service containing a OS customised Server Core template, the following presented in the jobs view:

Error (22042)
The service (JustAD) was not successfully deployed. Review the event log to determine the cause before you take corrective action.

Recommended Action
The deployment can be restarted by retrying the job.

The DISM log for the relevant timeframe presents as follows:

Note: When DISM is called in the customisation session, it appears to be called twice

Also note: Whether the NetFx2-ServerCore, MicrosoftWindowsPowershell & ServerManager-PSH-Cmdlets are installed in the base image (or not) seems to make absolutely no difference to this. The error occurs anyway, and any configured guest role/feature customisation following this step does not occur

When I logged this with Connect, I was informed that customisation of Core guests using OS profiles will not be available in SCVMM2012. I was advised to create a base disk with all my required packages baked in. This struck me as rather inelegant, and decided to research a neater workaround.

Fortunately, I didn’t have to stray too far! It appears that Application Profiles ARE compatible with Server Core guests, so I configured an empty Application Profile with a pre-install script that applied the features I wanted to integrate via DISM: 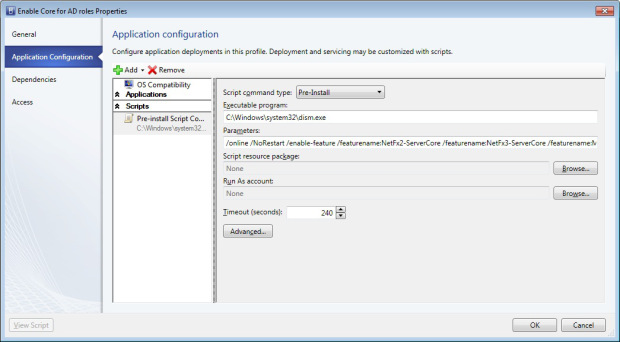 Once this application profile was applied to my guest in the Service Template, and any OS profile applied Roles & Features removed, the service tier successfully deployed.

With a small amount of work, I’m sure one could trim this spurious alert out. I’m not promising anything, as I’m not bothered by informational alerts, but there might be a follow up post to cover this.

I expect that this workaround might help a few SCVMM guys map put their Service Templates with a touch more consistency. However, I won’t go into any great detail as to how to throw the DISM commands together, as it’s been done to death by more experienced pro’s than me!